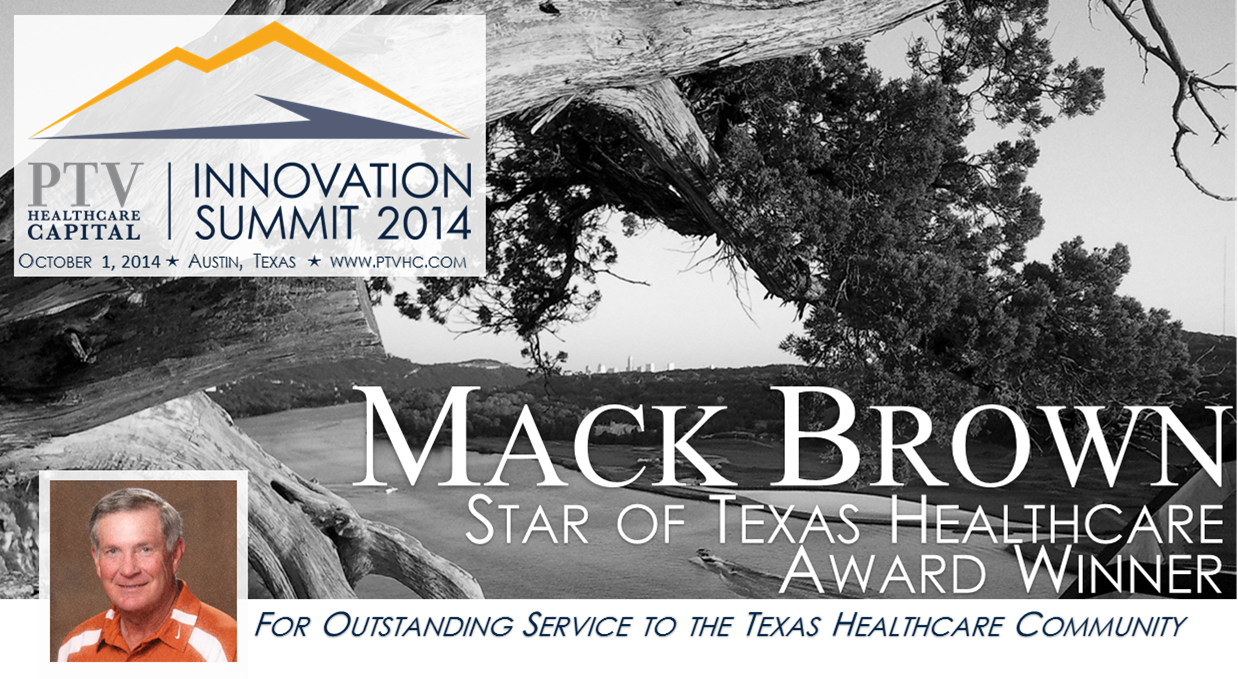 Austin, Texas – August 25, 2014 – PTV Healthcare Capital announced today that Mack Brown, former Texas Longhorns football coach, has been awarded the 2014 Star of Texas Healthcare Award in recognition of outstanding service to the Texas healthcare community. Mack and his wife Sally will be on hand to accept the award at the PTV Innovation Summit on October 1, 2014 in Austin, Texas.

In its seventh year, the PTV Star of Texas Healthcare Award has historically honored a healthcare professional for life-time achievements and contributions to healthcare in the state of Texas. Previous recipients of the Star of Texas Healthcare Award include John Mendelsohn, MD, Past-President of the MD Anderson Cancer Center; Steven McKnight, PhD, Professor and Chairman of the Department of Biochemistry at the University of Texas Southwestern; Mark McClellan, MD, PhD, former Commissioner of the US FDA for Medicare and Medicaid Services; Julio C. Palmaz, MD, inventor of the first commercially successful coronary stent; James T. Willerson, MD, President and Medical Director for the Texas Heart Institute; and Francisco G. Cigarroa, MD, Chancellor of the University of Texas System.

For the first time the 2014 Star of Texas Healthcare award will take a different approach by honoring outstanding philanthropic service in the Texas healthcare community and shining a spotlight on a cause that improves the healthcare system through educational outreach, expanding healthcare access, or promoting healthy lifestyles. PTV is proud to honor Mack Brown for his long history of service with The Rise School of Austin, his more recent endeavors empowering kids with the MJ&M Foundation, as well as his work with nonprofit organizations HeartGift and CureDuchenne among many others over the years.

Mack and his wife Sally have been stewards of the Texas healthcare community since they moved to Austin in the late nineties. The Browns were instrumental in the formation of the Rise School of Austin in August 2003. The non-profit school is dedicated to the early education of toddlers and pre-school children born with Down syndrome and other developmental disabilities in an integrated environment, with the goal of preparing them to succeed in mainstream kindergarten and life by the time they “graduate” at age six. In 2013 Mack teamed with actor Matthew McConaughey and recording artist Jack Ingram to form Mack, Jack, and McConaughey (MJ&M), a joint fundraising effort with the goal to empower kids. MJ&M benefits the Browns’ beneficiaries The Rise School of Austin; HeartGift, an organization that provides lifesaving heart surgery to children from around the world where specialized medical treatment is either scarce or nonexistent; and CureDuchenne, a national nonprofit that raises awareness and funds to find a cure for Duchenne muscular dystrophy, as well as a handful of other nonprofit organizations.

The Browns have received numerous accolades for their work. In 2008 they were named Caritas’ 2008 “Citizens of the Year” Award; in 2012 they were named Couple of the Year at the 10th Annual NFL Alumni Caring for Kids Banquet for their continued commitment to children, and for their overall commitment to be a charitable force in central Texas. The Browns’ longstanding, personal commitment to the Rise School will be permanently recognized when the Sally and Mack Brown Rise School of Austin opens the doors to its new 17,000 square foot facility later this year.

“Mack and Sally have a long track record of service to the healthcare community,” said PTV Managing Director Matt Crawford. “Their work with the Rise School of Austin, the MJ&M Foundation, and many others has impacted thousands of lives across Central Texas. It is an honor to be able to recognize the outstanding work that they do and shine a light on some of the causes closest to their hearts.”

PTV is a healthcare venture capital firm dedicated to enabling healthcare entrepreneurs and global innovation. It is comprised of a highly collaborative team of professionals, deeply experienced as investors and operators of life science companies. PTV focuses on mid-to-late stage companies with comparatively low technical, regulatory, and financial risk that are “with the grain” of healthcare economics – improving patient outcomes while decreasing costs – in markets with significant unmet clinical needs.

PTV’s Innovation Summit is a highly collaborative event bringing together investors, entrepreneurs, and healthcare executives to share unique perspectives on the changing healthcare landscape in Texas and beyond. This program includes the PTV Investors Meeting as well as the inaugural session of PTV University, an educational initiative designed specifically for the healthcare executive. The PTV Innovation Summit will take place in Austin, Texas at the AT&T Executive Education & Conference Center on Wednesday, October 1, 2014. More information can be found at www.ptvhc.com/investors.